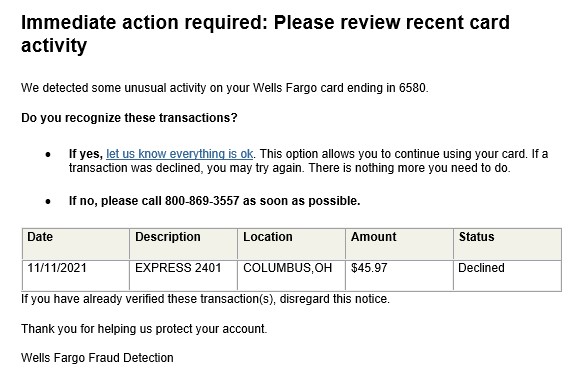 *** Update 9/12/22 *** – Thousands of people are visiting this blog regularly due to card fraud of their own via Express Store 2401. I have not been able to gather any more information from the companies involved, but I continue to dig deeper into how they’re stealing these cards and other parts of the operation. It’s ridiculous that it’s been going on this long and that Wells Fargo isn’t concerned with somebody stealing a card that’s never been used.

Wells Fargo texted me the other night about its fraud system. The issue was an attempted charge from EXPRESS 2401 in Columbus, Ohio. After a bit of Google research, I found that the world is no stranger to fraud coming from this location. 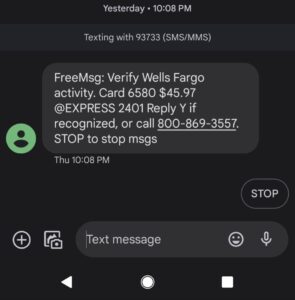 I’ve never once used this card with any other merchant or website. It was activated in June of 2021 and then locked in a cabinet. It also seems that if something were purchased on Express.com, it would show up as CORP, not a particular store location.

Here is the response from Express:

As a part of the investigation, I’ve set out to answer a few questions about this particular scenario:

The story will be updated as more information is obtained about this issue at Express Stores.

As others have mentioned, the #DHF or #DecentralizedHedgeFund #Bitcoin rug pull, creating evermore victims to fake investment sites.