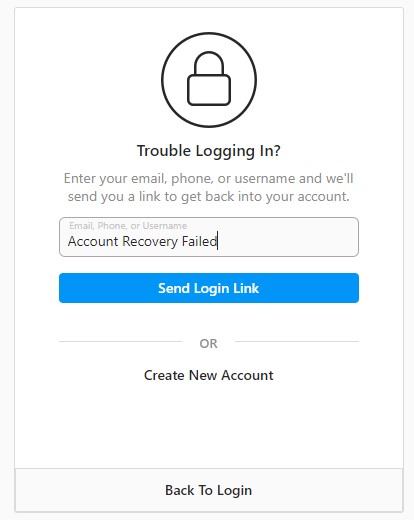 Posted by Infostruction on November 29, 2021
Is Instagram’s account recovery workflow disappearing on some accounts and devices? We’ve had reports from readers and friends who’ve had hacked Instagrams with no success in using Instagram’s published docs to recover the account once the attacker’s email and phone number have changed. Here’s a copy of the official Instagram post: I think my Instagram … ...
READ MORE

I’ve been using computers since the early 90’s when my adoptive family bought a PC from Packard Bell. We subscribed to Prodigy, AOL, and other modem-based dial-up services in the region. My first hack was crashing a program called ‘Navigator’ designed to keep kids in a safe play area on the PC. The trick? I discovered a critical combination that would crash Navigator and expose the computer’s desktop. Simple, but circumvention in this way was appealing, and it came with it a desire to explore all things technological.

In those days, my brother made a habit of stealing the money I was earning for web design and local computer support. I quickly caught on and then saved up enough to buy a large home safely. After all, was said and done, there was no money in the safe, but I had the building blocks to keep out the intruder. He’d occasionally try to pry at the hinges anyway, to spite me. I’d come home to see his handy work as he could only scratch the surface. I had told our parents that I wanted to put a camera in the hallway, and the experiences continued to weigh in on my strategy. I strongly believe in is the practice of protecting others from malicious actors and those who seek to take what does not belong to them.

My career has always been about maintaining an appropriate intensity, direction, and persistence to keep my life in balance and provide a consistent quality service to any organization I work with. Today’s result is self-concordance, job engagement, and commitment to achieving goals. Throughout the last ten or so years, I’ve been able to build, explore, and develop security systems worldwide. I’d say the chances are pretty good that I’ve protected something that belongs to you along the way…

In my writing, I am typically drawing on experience from interviews and chats with hackers in the late 90s like as John Vransevich from AntiOnline, Kent Browne from HackPhreak, Carolyn Meniel of Happy Hacker, Eric Ginorio of Attrition.org, Marc Maiffret of EEye, Jodi Jones (VeNoMouS) Milw0rm, Patrick Gregory (MosthateD) from Global Hell and many others from various global hacking groups and organizations. I’ve got a lifetime of experience hanging around with hackers, and that’s because I was one at a very young age. I’I’vead face-to-face meetings with the FBI and Secret Service before turning 18. I don’t sell this, but it’s certainly a perspective. I was never a ‘bad person’ who stole things, conned people, or caused damage/losses to others. I’d never sought to damage, disrupt, defraud, or compromise information integrity, availability, or confidentiality in my exploration.

Do you think at this point that I know more about you than you do about me?

Did you ever consider that I might be looking for you, and now that search is over?

Contact me at the bottom of this page if you have any questions/comments about the site.