AT&T iPad site hacker to fight on in court

A hacker facing trial on charges that he and a cohort conspired to break into an AT&T Web site for 3G iPad users told CNET today that he will fight the charges “to the end.”

Andrew “Escher” Auernheimer, 26, was indicted several months ago on one count of conspiracy to gain unauthorized access to computers and one count of identity theft. He faces up to 10 years in prison and $500,000 in fines. Co-defendant Daniel Spitler pleaded guilty in June and a judge put the case on hold, reportedly because of plea negotiations.

But Auernheimer, whose hacker handle is “weev,” says he’s not going to cop a plea.

“I did not fold the two previous times when the FBI tried to frame me as a terrorist” for allegedly calling in a bomb threat to a synagogue, which he denies, he said in an e-mail. “I will not fold now when they try to libel me as a thief. My indictment conveys a message that I am some sort of identity thief.”

In a follow-up phone interview, Auernheimer said he has done “nothing ethically wrong” and is being persecuted for “telling the truth” by exposing a security hole in AT&T’s Web site that was leaking e-mail addresses and unique device numbers for about 120,000 3G iPad users last year, including government and high-profile corporate customers. 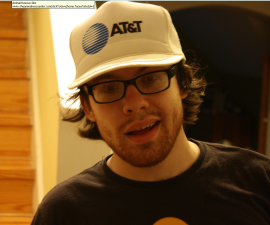 Andrew Auernheimer, aka “Weev,” in a photo from earlier this year.(Credit: Anonymous)

“I contend there is no crime in telling the truth or using AT&T’s, or anybody’s, publicly accessible data, to cite it to talk about how they made people’s data public,” he said. “There’s a continuance until January. There may be a trial then…I just want to fight this thing to the end.”

A Department of Justice spokesman declined to comment because the court case is pending.

Asked his thoughts on Spitler’s guilty plea, Auernheimer said he was sure that Spitler would “cooperate in some way.” “I don’t blame him. He’s a good guy,” he said of his former hacking partner. “It’s probably terrifying for most people to go through this process. I’ve been fighting ‘The Man’ for years.”

Spitler wrote a script called the “iPad 3G Account Slurper” and used it against AT&T servers to harvest the iPad user data. The Justice Department contends that he and Auernheimer plotted on how to take advantage of the security hole for profit, but Auernheimer claims they were merely trying to protect consumers and waited until AT&T knew about the hole and fixed it before allowing Gawker to publish the details.

“I’ve never once made a dime off embarrassing a large corporation. I’ve never attempted to make a dime and AT&T is basically a public figure that is open to criticism. I think it’s fair,” he said. “Embarrassing somebody by telling the truth is not malice. It’s necessary speech.”

The Justice Department has released excerpts of Internet Relay Chat (IRC) logs in which the hackers discussed selling the e-mail addresses to spammers, shorting AT&T stock before releasing details of the breach, and destroying evidence.

In one exchange, Auernheimer writes: “This could be like, a future massive phishing operation serious like this is valuable data we have a list a potential complete list of AT&T iphone subscriber emails,” to which Spitler responds: “ipad but yeah.” Asked to comment about statements from the logs that would appear to be damaging to his case, Auernheimer said “It’s easy to misconstrue a true statement as evidence of malice…our acts reveal no malice. I went straight to the press and I told exactly what needed to be told.”

When asked why he didn’t go directly to AT&T first, he said: “AT&T has a commercial interest in not having their negligence with consumer data spoken about, ever…I used the press as a proxy and I waited for (AT&T) to patch before going public.”

Auernheimer, 26, said he is barred from using IRC, communicating with anyone in his hacking group or any potential witnesses or co-defendants, and doing random Web browsing, but can use the Internet for “commerce.”

He was forced to leave his Fayetteville, Ark., home because of a bail condition requiring him to stay in the jurisdiction, he added, and as a result, he is living in Jersey City, N.J. (Meanwhile, drug charges he was arrested on last year after an FBI sweep of his home in the AT&T case have been dropped, he said.)

He has a public defender and has raised about $10,000 for his legal defense fund, he said. While he waits for trial, he is learning the Erlang programming language and is “open to security work.”

“I definitely have a habit of pissing people off. I’m not apologetic for that,” said the self-described Internet “troll.” “I think that the people that get pissed off probably deserve it. It serves a social function.”

I have known and spoken with Andrew over a number of years in the hacking scene. Hopefully this one works out for him!