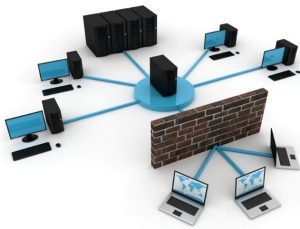 (Excerpt of a speech I saw in person by Dan Geer, a wizard who inspired me greatly when I saw him present at a conference. This post is meant as a tribute to his supreme wisdom as he perfectly captures the essence of the battle we face ahead. It is not my own content.)

Our society’s infrastructure can no longer function without computers and networks. The sum of the world’s networked computers is a rapidly increasing force multiplier. Today’s businesses are becoming heavily dependent on technology for integration, productivity, and organizational scalability.

Data is an increasing fraction of total corporate wealth and needs to remain secure while ensuring confidentiality, availability, and integrity.

Increasingly, organizations require communications to provide rapid and agile collaboration, information sharing, and connectivity to data sources. Technology enables employees and partners to work and access systems anywhere, anytime – also placing systems at an increased risk by the same token of availability. The protection of digital assets during transport, and at rest on storage devices is essential to the life cycle of information, as it transcends the border of physical and logical controls.

The world of security is becoming more complex and threatening every day. This increasing complexity embeds dependencies in a manner that may diminish the frequency of surprises; however, the surprises will be all the more unexpected when they inevitably occur.

Security is becoming a means and not an end; modern protection strategies are quickly shifting toward risk absorption rather than risk avoidance. Service orientated architectures and Web 2.0 technologies are fueling the internet revolution while at the same time rapidly deteriorating the security situation. That deterioration compounds when nearly all individuals and businesses are establishing dependencies on computer and communications systems. It is thus obvious that increasing dependence means ever more difficulty in crafting protections against known and unknown threats to systems.

The traditional network barriers that separated trusted from untrusted and “inside” from “outside” are now disappearing. As more applications become directly accessible to remote users and systems, the concept of the network perimeter becomes increasingly vague and more difficult to protect. Attacks are no longer confined to lower areas of the network stack and target widely adopted systems and software programs, having major implications globally, in all sectors.

Threats and risk are chiefly growing amongst the poorly coded applications, and unsophisticated end-users. Modern day security has become architecture of devices, people and software that work towards providing the best possible layered defense against attacks.

We now know that protections need to work together in a concerted effort to reduce risk, and mitigate known these unknown threats to our infrastructure.

Those with either an engineering or management background are aware that one cannot optimize everything at once, and that requirements are balanced by constraints. In engineering, this is said as “Fast, Cheap, Reliable: Choose Two.”. In the public policy arena, we must first remember that the definition of a free country: a place where that which is not forbidden is permitted.

No society needs rules against impossibilities and I believe that we are now faced with “Freedom, Security, Convenience: Choose Two.”

After 15 years of analyzing the playing field, I am convinced that at some point, in the near future, one of us security geeks will have to say that there comes a point at which safety is not safe.

The sophistication of attack tools and methods used by hackers

A proud member of:

The InfraGard program is a public/private cooperative effort dedicated to improving our national security. InfraGard consists of Chapters throughout the United States. The FBI leads the U.S. Government side of InfraGard. Infragard provides a trusted forum for the exchange and channeling of information and subject matter expertise related to the protection of our nation’s critical infrastrcuture from physical and cyber threats.

The New Reality of Stealth Crimeware

Anyone who has been in information security recently knows that it has gotten easier for cybercriminals to build stealth crimeware. The malware we deal with on a regular basis grows ever more difficult to find, while high-end targeted attacks such as Stuxnet and other advanced persistent threats (APTs, the abbreviation I hate) are using ever more advanced rootkit techniques to avoid detection.

Cybercriminals use clever stealth techniques to evade detection because it allows their malware to be more effective, live on a machine or network longer, and thus maximize the compromise. McAfee Labs is now at the point where we detect more than 110,000 new unique rootkits per quarter.

To make matters worse, there is another issue that many fail to recognize:

Today’s current OS-based security model is not adequate; cybercriminals know how to get past these defenses every time.

The security industry has to find a new vantage point on cybercriminal behavior to stop and uncover their stealth techniques. It is time for our industry to start looking at security beyond the operating system to gain a more effective view of how cybercriminals operate.

We delve into these and many other issues in our latest report: “The New Reality of Stealth Crimeware,” written by myself and Thom Sawicki of Intel. Download it here.

Stealth is the art of travelling undetected, of being invisible. Stealth technology allows military aircraft,
Ninjas, and malware to sneak up on the enemy to launch an attack, gain intelligence, or take over
systems and data.

Although stealth techniques are used in sophisticated attacks like Conficker and Operation Aurora, the
Stuxnet attack offers a new blueprint—and benchmark—for how committed criminals can use stealth
techniques to steal data or target computing systems. Stuxnet innovations included a combination of
five zero-day vulnerabilities, three rootkits, and two stolen digital certificates. Powerful toolkits, like what is available in the Zeus Crimeware Toolkit, make stealth malware development a “point- and-click” endeavor, no longer restricted to the most knowledgeable programmers. While there are no definitive industry figures, McAfee Labs estimates that about 15 percent of malware uses sophisticated stealth technique to hide and spread malicious threats that can cause significant damage.1 These attacks form the cornerstone—the “persistent” part—of advanced persistent threats (APTs).

Rapport is a lightweight security software solution that protects web communication between enterprises, such as banks, and their customers and employees. The product is free for the customers of over 70 different banks, AND can also be downloaded independently of those services for FREE. You can protect any web site you choose outside of the network, and also use the tool with Chrome, IE and Firefox. 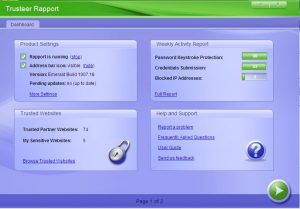 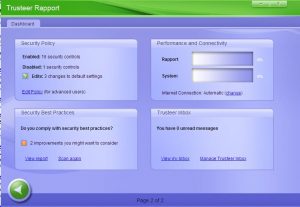 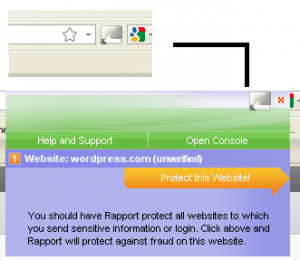 Rapport implements a completely new approach to protecting customers and employees. By locking down customer browsers and creating a tunnel for safe communication with the online website, Rapport prevents Man-in-the-Browser malware and Man-in-the-Middle attacks. Rapport also prevents phishing via website authentication to ensure that account credentials are passed to genuine sources only.

Rapport’s unique technology blocks advanced Trojans including Zeus, Silon, Torpig and Yaludle without the need to constantly update and chase the different variants of these Trojans. Its proprietary browser lockdown technology simply prevents unauthorized access to information that flows between customer and employee websites regardless of whether these attempts were generated by new or known Trojan variants. Rapport is also capable of preventing very targeted and under the radar phishing attacks.

Enterprises such as banks can easily configure the system to protect customers and employees and begin offering them Rapport software for quick download from their website. Following a simple one time installation process, Rapport begins securing browsers, works in the background and does not call for a change in user behavior – customers and employees can bank and use the internet as usual – thus enabling fast adoption. Rapport comes with a rich management application that enables enterprises to effectively trigger alerts, view and analyze data as well as manage security.

Rapport is focused on preventing online fraud committed by financial malware and differs from Anti-Virus because it:

* Allows for immediate action to be taken against changes in the threat landscape.

* Prevents wire and ACH fraud
* Protects against account takeover attacks
* Deployment within weeks, requires no change to enterprise applications
* Fast notification of threats affecting your customers and employees
* Fast adoption by customers using proven tools
* Added security with no change in user behavior
* Proactive rather than reactive to threats and incidents

Keystroke Lockdown – Rapport prevents tampering and reading of data by encrypting sensitive information from the moment it is typed into the keyboard until it reaches the browser. Trusteer encrypts keystrokes very low in the operating system’s kernel and keeps them encrypted inside the kernel and user space to achieve this goal.

Communication Lockdown – This technology enables Rapport to verify the legitimacy of the website that the customer or employee is currently using, preventing the submission of sensitive information to fraudulent websites. What’s more, verification of a direct connection with the website and assurance of encryption are also confirmed to prevent Man-in-the-Middle attacks. This technology prevents many ACH FRAUD transactions and efforts of trojans such as Torpig & Zeus.

Actionable Intelligence – All policy violations, such as attempts to read password fields and change web page content are reported to the Trusteer cloud-based fraud analysis service. Trusteer’s team of fraud analysts works 24×7, analyzing information from customers all over the world in order to identify new attack patterns. Advanced automatic update mechanisms allow Trusteer to react immediately to new threats. Organizations are immediately alerted regarding new attacks as they occur, instead of days, weeks, and even months after the fact.

These are not the days of the Nimda Virus, so get protected!