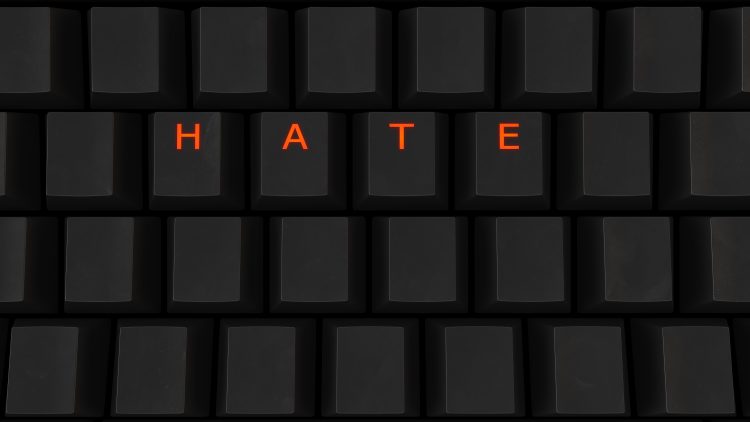 I started thinking about this topic, and ultimately a blog, when a troll was repeatedly scrolling the “N” word on a video game I was playing last night. What’s more, this person felt comfortable doing it in front of 64+ other folks of unknown age, or ethnic backgrounds who were playing the game with us! I thought to myself, who are these trolls? What drives them? Do they have jobs or a family? I got the sense that hate goes deep into the psyche of the individual. I often times wonder, do they feel the way they hate? Or, do they hate the way that they feel?

If your attitude informs behavior, then typing that word over and over means that you are:

Just for kicks, I made a simple investigation into this person via public databases like Google and other websites. The most interesting thing was that the nickname he used seemed to be a real name, not a typical handle like “deathwarriorbot.” Well, that piqued my interest, and it didn’t take long to find out who may have allegedly been behind the hate – read on, and I’ll tell you what I found.

It’s official that the internet has become a cesspool of carbon copy trolls. There are many ways hate speech spreads online, and it seems to be getting worse. Twitter users line up to target people, and then anonymously rip them to shreds for fun and good times. It’s a psychological warfare, and these seemingly anonymous trolls have flourished in an environment of little accountability. I know quite a bit about trolling, especially since I hacked from the early 90s until the mid-2000s; in fact, many of us trolls were hackers, information gatherers, and pranksters. We’d make phone calls to friends and other individuals, playing various jokes, some cruel, but nothing that could ruin a person’s life, and we’d never use hate speech to attack others. Sites like Twitter have given just about everyone a “voice” and can be highly politicized at times, littered with pure hate and negativity. Remember the old saying “Opinions are like a**holes, everybody has one”? Well, it’s true, and while I support free speech, I don’t condone speech that is hateful or intolerant. Honestly, I don’t like to read any comments nowadays, given the climate of trolls who are hate mongers.

It seems with the rapid growth of the internet, many of these people don’t care about being anonymous, as long as they can broadcast their message. There’s plenty of coverage on the psychology of why they do this, and on how the internet makes them feel powerful. I know this firsthand, as I’ve seen more than one Twitter or YouTube that has little to no followers or hits – but they carry on as if they’re on a podium of power, albeit a tiny one. Does that stop these people from thinking that somebody is listening? No. I don’t know what they call the disorder of having a disproportionate belief about your perceived power online versus offline, but I bet it’s hard to pronounce.

For example, in the political realm, a person’s beliefs seem to unconsciously be a part of his or her identity. If you attack a political figure, it is perceived as if you are attacking them directly at the core of what they believe. Attackers become stereotypical gang members who can take down any target at will. They preach division, not inclusion, and I think most of the time we have no idea who they really are. And because there’s proof that Russia and other countries have been behind many efforts to sway U.S. public opinion, it’s obvious that they do not reflect who we are as Americans – if they are from the U.S. at all.

To quote a favorite author of mine, Alan Weiss, from his Balancing Act blogs, “The human condition is not necessarily one of polarization. While tribes and cultures have been fighting for land and resources and power for millennia, they have also been able to come together for mutual benefit. The right to disagree, debate, and demur is important, even vital. But the belief that you’re with us or against us, you’re friend or enemy, is absurd. Despite the fact we may agree on a hundred other issues, this one issue creates an impregnable divide? Like the starship Enterprise, the emotional “shields” descend and prevent rational discourse and even logic from penetrating. You’re the “enemy,” so I have no intention of listening. Confirmation bias is viciously in play with highly emotional subjects: climate change, abortion, vivisection, politics, health care, welfare, education. That’s because passionate beliefs need to be shored up at all costs, and were reluctant to listen to evidence to the contrary with any objectivity at all. We need to stop searching solely for opinion and information that support our point of view (which is most of the activity on Facebook, by the way). As intelligent beings, we owe it to ourselves and our society to deliberately pursue varied points of view to draw our own rational conclusions.”

So what can we do about trolls? Report them? Shame them publicly? Invite them to an MMA fight to ‘work things out’? I’d love that, but cowards typically won’t reveal themselves. It takes away their power when you can identify them, and for a troll, having the ‘docs’ on somebody is the ultimate weapon. It usually goes from politics to ad hominem (against the person), as you have to remember, this is about the ego defending one’s personal ‘identity.’. Nowadays, ignorant, intolerant college students shout at and shut down speakers with whom they disagree. What’s wrong with these students? Maybe we need accountability by lifting the mask of who’s behind the hate, and then it will be more apparent to trolls that their actions have consequences.

Now, on to the incident from last night… Note: there is explicit content in a racial slur, shown in a screenshot below.

Disclaimer: The information provided is as-is, and we do not condone the harassment of any individual, or hate speech. We are not stating it is a fact that this person conducted these activities, only sharing screenshots of a correlation between the name on this game, and what was found on Google. We are not ‘attacking’ this person, merely following a logical investigative path to uncover information. We are not accusing them of a crime, or wrongdoing. Do not attempt to call, e-mail, tweet, or harass this person based on this information. The purpose of providing this information is to offer a perspective into a situation that I directly witnessed, and impacted me personally. I’ve only compiled information from Google searches and added the perspective of any typical internet user.

*** Update 11/7/2018 – Ran into Nathan again on his foul racist tear in the game Battlefield. In this case I prompted him, “Nathan, why are you so mad?” to which we answered (confirming that he is infact Nathan at the helm) that it’s “because of noobs”.

Screenshot of a user ‘NthnKirsch2’ writing vulgarities over and over, an estimated 100 times throughout the game in Battlefield 4, shown below: 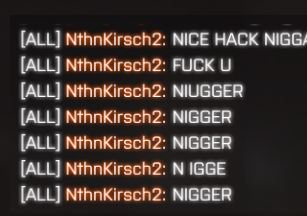 Wait, there’s a twitter @nthnkirsch2, what are the odds? Probably just a coincidence, I mean we can’t confirm this guy is the same person, right? 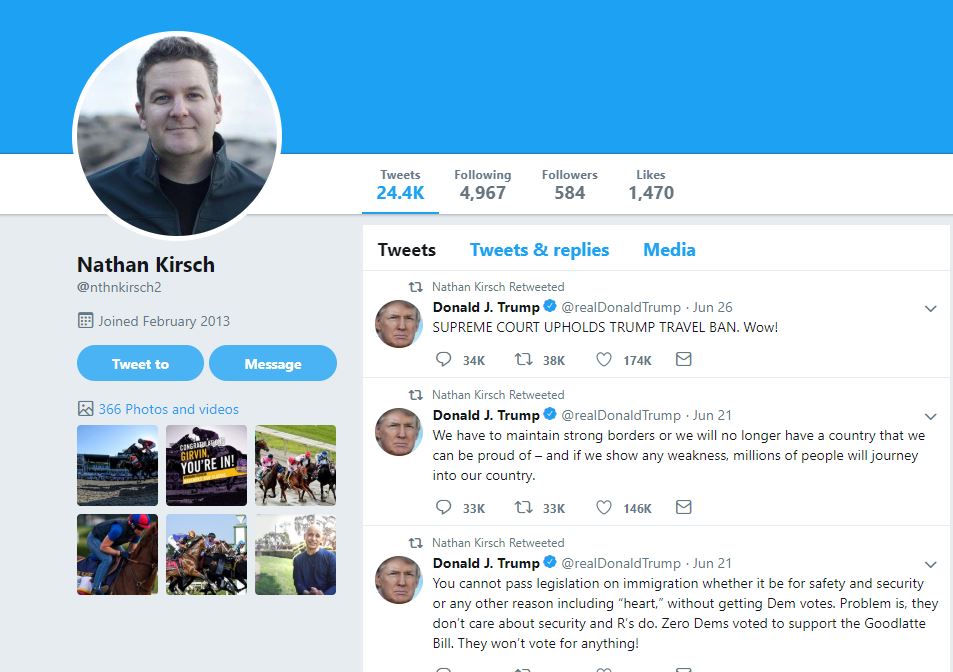 Support for politics correlates with another comment on Steve Bannon

Hmm, the account for his game below seems to have the same picture. But hey, maybe it’s just another coincidence. Oh wait, it could be that a family member uses the account. Maybe a bad little brother, I mean that would explain it, right? 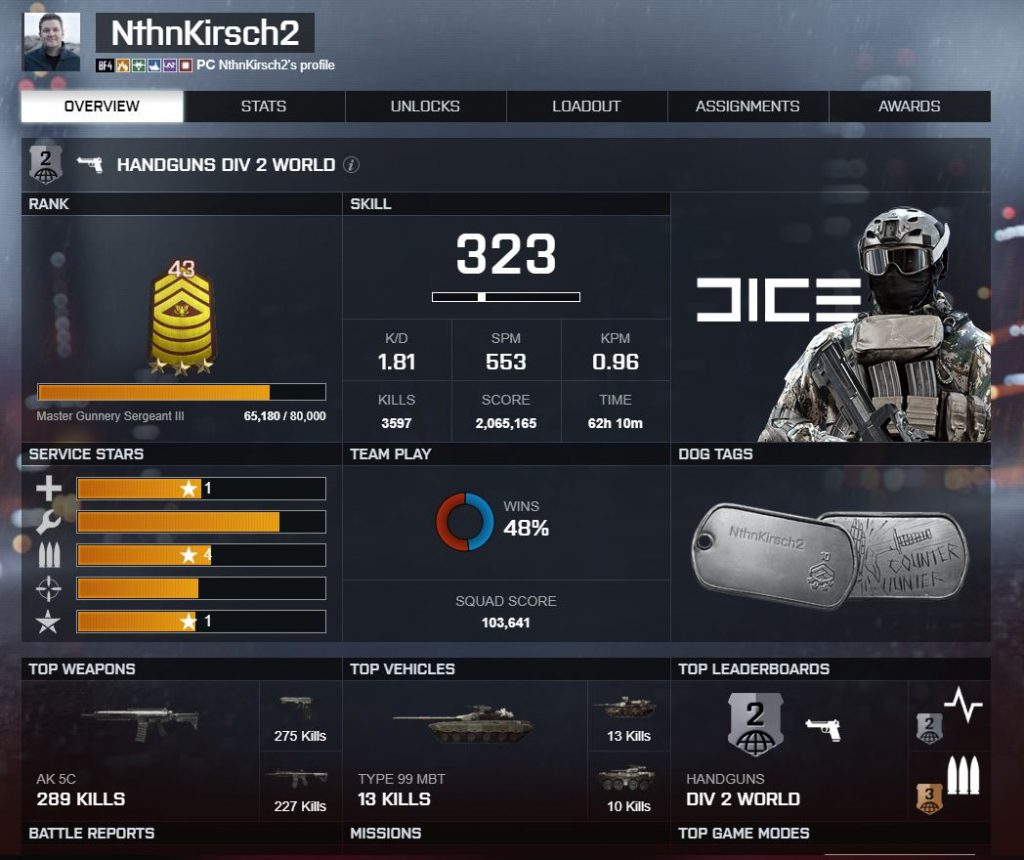 It looks like somebody using Nathan’s account petitioned to have a ban removed, for guess what? None other than racial slurs. This happened back in 2014, so either his “little brother” (Nathan was 34 at the time) is back with a vengeance, trying to throw dirt on his name, or it’s a cover-up.

In the blog posting, there’s a reference linking the alias nthnkirsch1, a member of steam that says the user is from North Carolina. This is important because in the Linkedin below the primary education of the user is Duke University, located in North Carolina. There is another Nathan I found in NC, and he’s still in college not a 38-year-old male, like what is shown above. 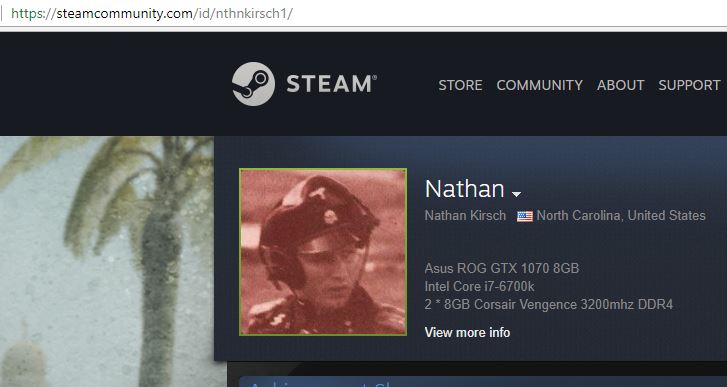 It seems like this hateful user shares a bit of ‘gaming rage’ with his little brother (if he actually exists). Earlier this year was complaining about hacks, cheaters, and issues using the game. This is similar to the comments in the game of ‘nice hack’, seems to fit pretty well with the first image:

Found a comment here with hate speech by user Nthnkirsch2:

Here’s a facebook, which we assume is the same, Nathan. He’s living in PA, and self-employed. 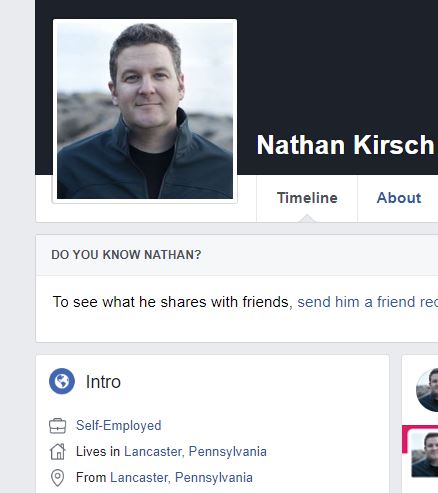 A quick search on LinkedIn finds a one Nathan Kirsch, from PA. Unless there are two Nathan Kirsch’s in the same town in PA? He appears well educated from Duke (North Carolina) for a person spewing this kind of racism (little brother?), and is currently the CEO at Radon Be Gone primarily serving people in Colorado, Idaho, Montana, Nevada, and Wyoming. 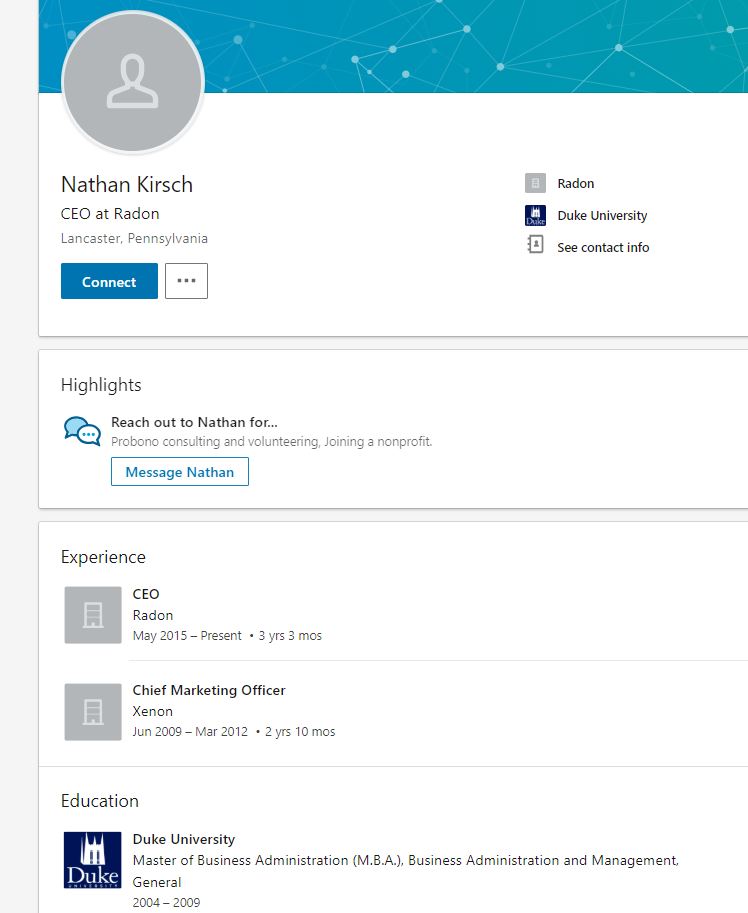 Confirmed by other information available on the internet, simply by searching the name we found in the game, nothing more. If Nathan is the one perpetrating this hate, then he hasn’t done much to cover up his tracks. 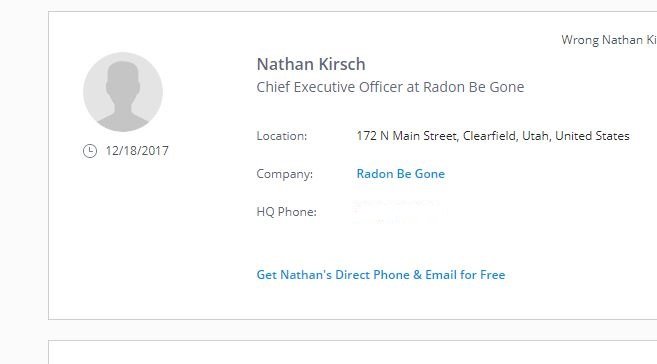 Any comments from Nathan Kirsch or Radon Be Gone? I’d be happy to discuss, and post your thoughts on the issue. Please advise, as I’d like for myself (and my little family members) to play a game without being exposed to hate speech. Nathan, if this was you I hope it’s a lesson that not only should you be more careful about using your real name and maybe have a bit of compassion for people of color. Something hateful is inside of you, and it seems to have been festering for a while. Why do you attack other people? What makes you so angry? If it was Nathan’s little brother he’s been at this for years now based on what we found online. I think it might be time for him to create his own accounts, and stop using the good name of his big brother.

I’m wondering if can people like this can change – or become better by accepting a love for diversity? It’s hard to say, but I felt like using my voice here could shine a light on this issue, and show you that not all trolls are immature 12-year-old gamers who are not worth looking into. Some of these trolls and hate speech advocates appear to be well-educated CEOs, and they seem to have nothing better to do than spread hate – a clearly unsustainable way to live in the melting pot we call America.

Trolls just want to have fun, and unfortunately for them, that correlates strongly with sadism, psychopathy, and Machiavellianism. 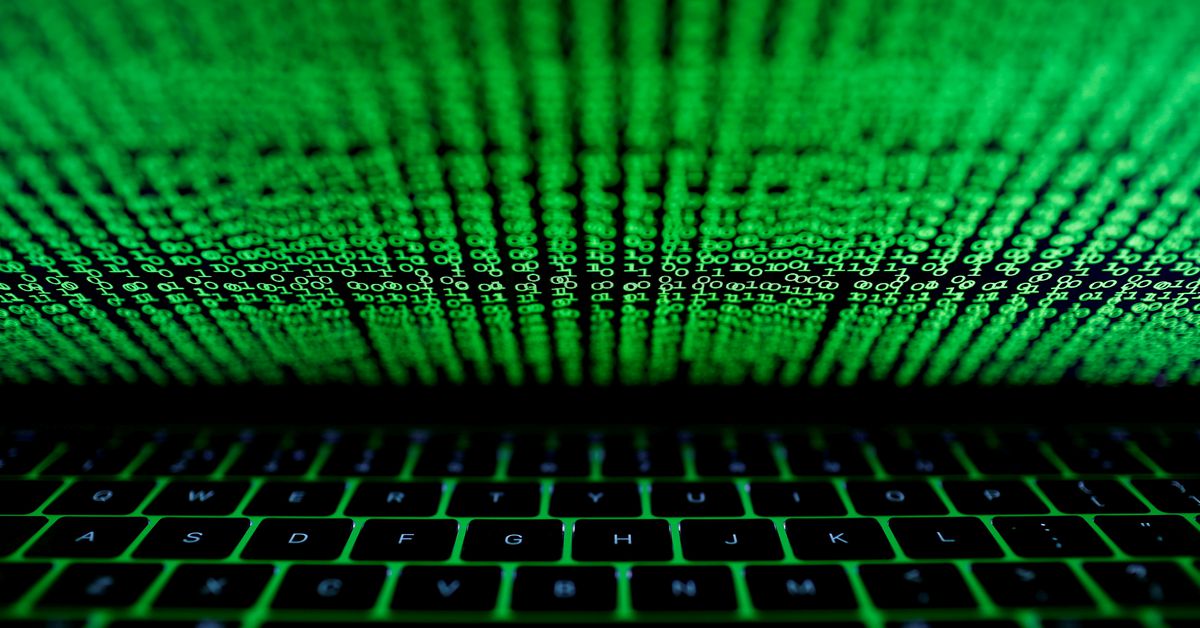 What A New Dune Video Game Could Look Like In 2021 | Screen Rant https://screenrant.com/dune-video-game-new-2021-strategy-management-survival/

Tech workers warned they were going to quit. Now, the problem is spiralling out of control | ZDNet 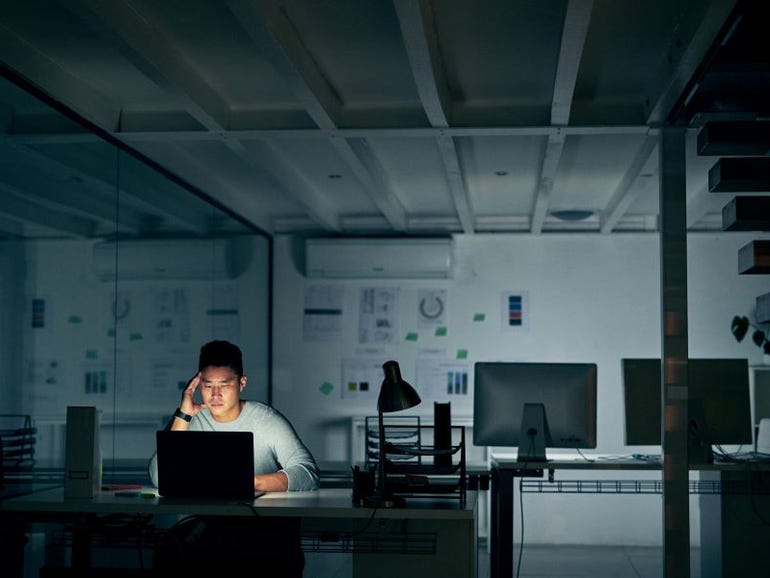 Tech workers warned they were going to quit. Now, the problem is spiralling out of control | ZDNet

Tech workers complain of toxic work environments, unrealistic demands from employers, and a lack of career progression. Research suggests that they ma... 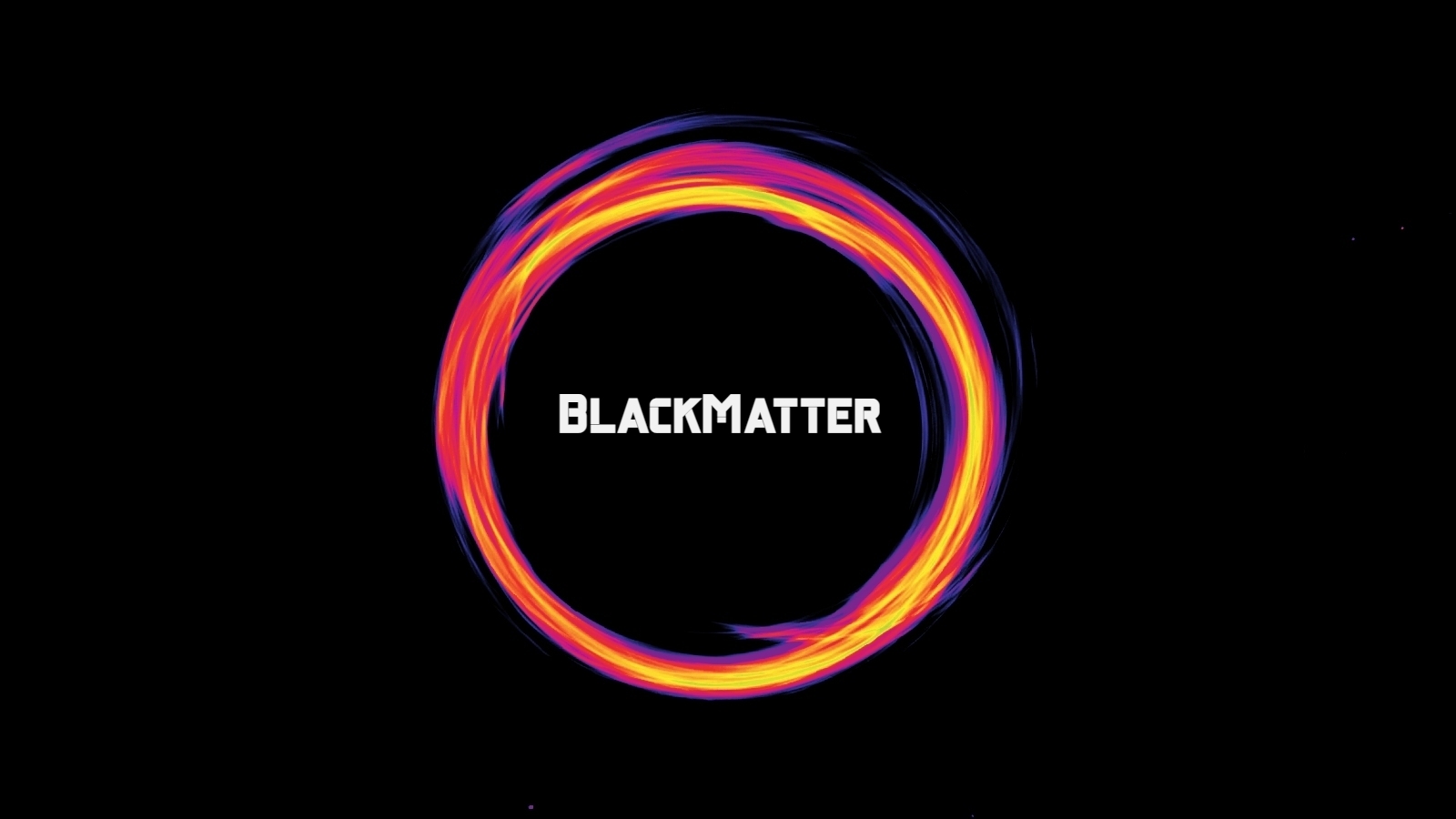 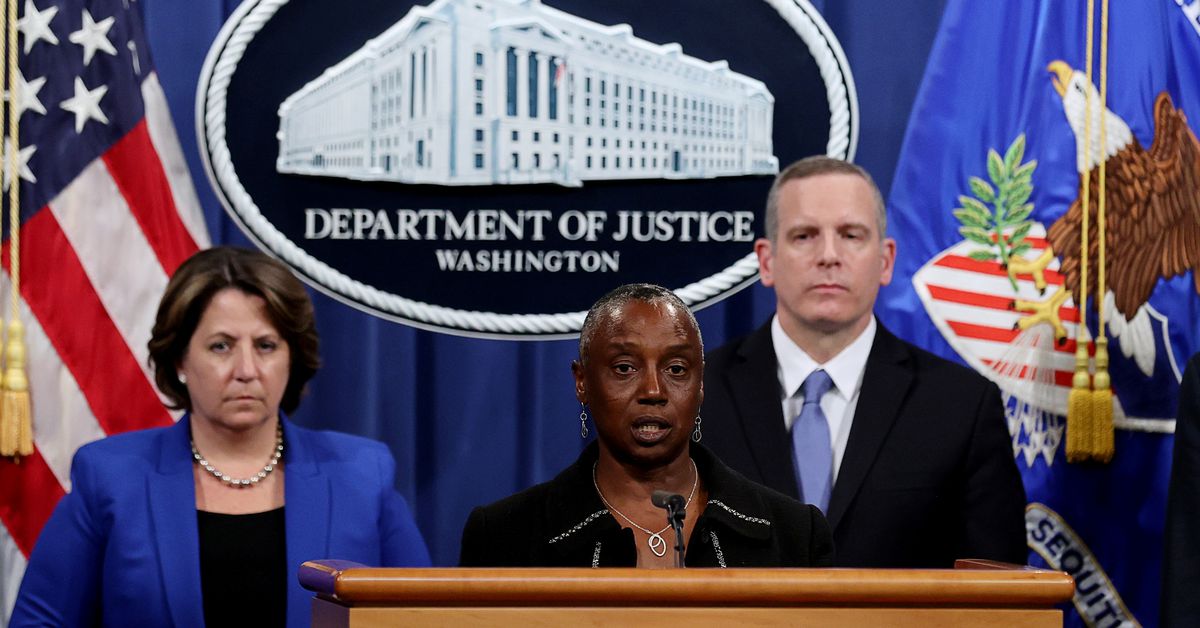 The ransomware group REvil was itself hacked and forced offline this week by a multi-country operation, according to three private sector cyber expert... 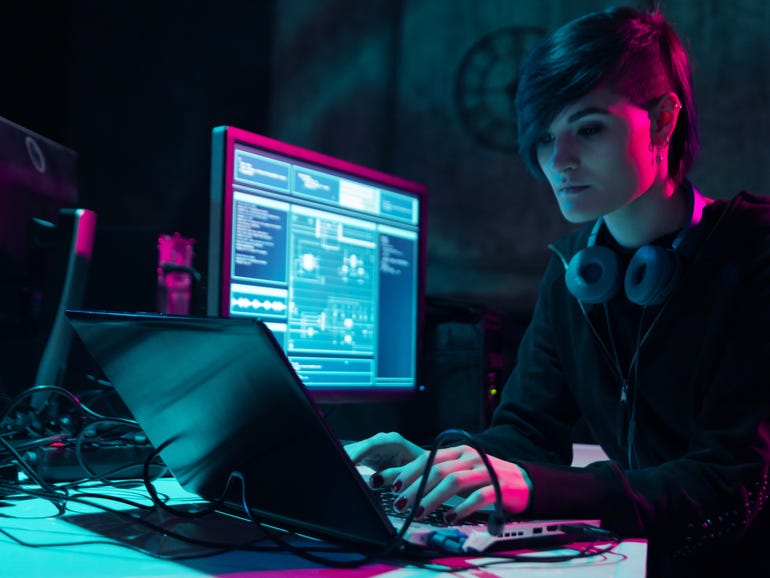 Akamai might have found a better way to detect malicious obfuscated JavaScript code.

Microsoft 365 will tell your boss if you're misbehaving online 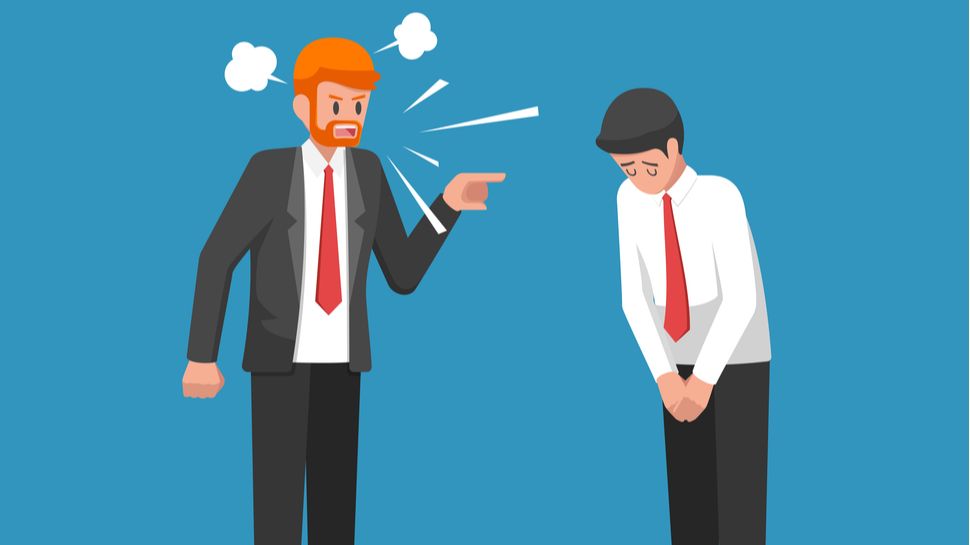 Microsoft 365 will tell your boss if you're misbehaving online 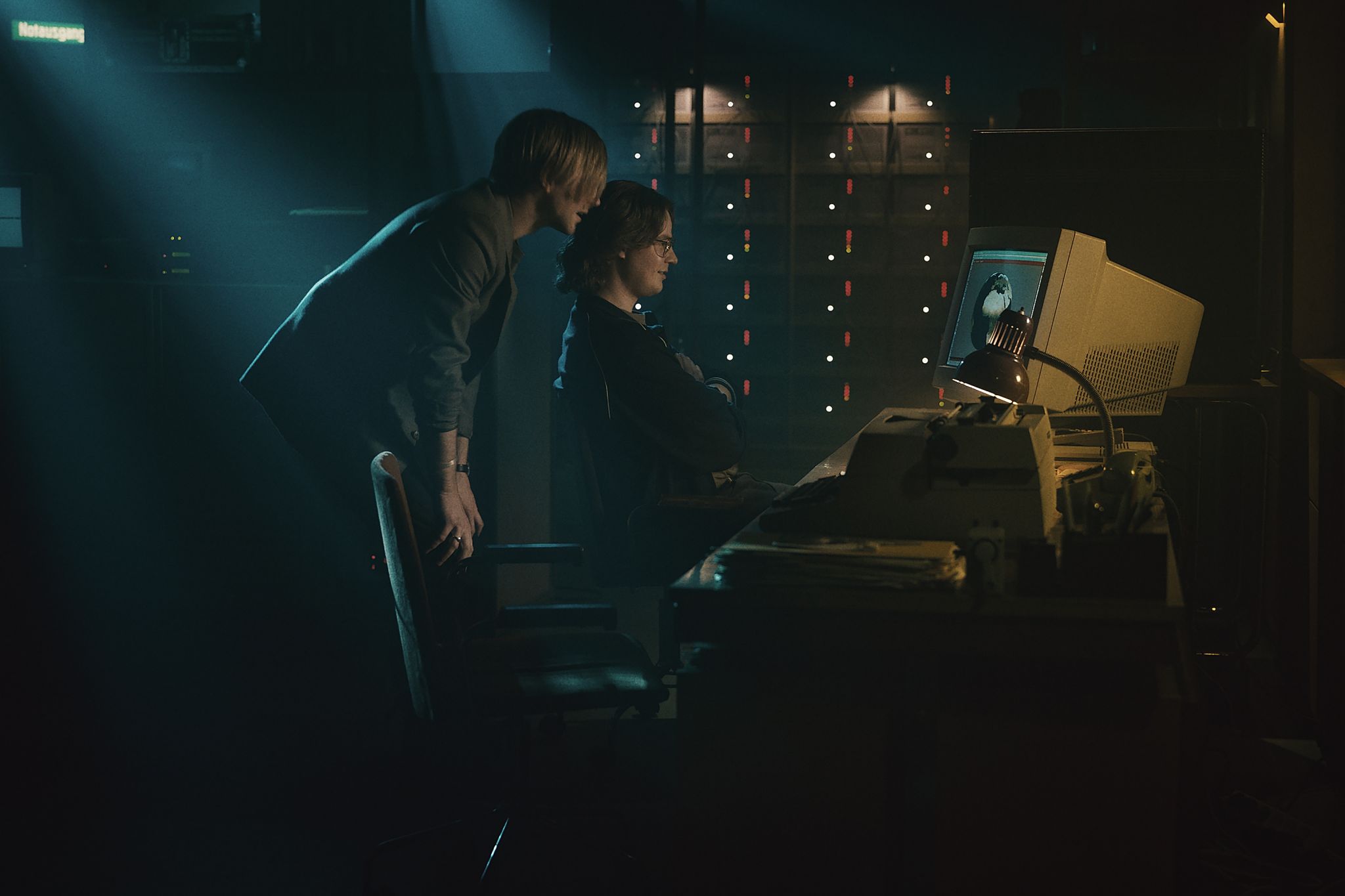